An artcle on Bharat Bhushan by Sahir Ludhianvi : Filfare, 1961

It was during the planning stages of “Bar­saat ki Raat” that we saw much of each other. Sitting to discuss the story of the film, its characters and other preliminaries afforded me an opportunity of knowing the man. Simpli­city is his virtue; so is humility. Everyone who knows Bharat superficially tells me that he has one great failing—that of never being able to muster courage to say ‘no’ to anyone or anything. But I know to the contrary. It is not because of lack of courage, but because life has mellowed him to the point of never wanting to inflict pain. When, on rare occa­sions, he does say ‘no’ to someone, he is as firm as a rock, while at the same time remaining gentle as a lamb.

Bharat is the supreme example of an In­trovert. He is always withdrawn and mostly takes refuge in a book. He is a man of few words, but when he speaks, he impresses the listener deeply. To my mind Bharat’s perso­nality has been greatly influenced by the bio­graphical roles he has played. There is Kabir, the mystic poet-saint; Ghalib, the eloquent poet with a life time devoted to the flavor of wine and the music of words; Chaitanya, the great founder of the Krishna bhakti cult; Baiju, the singer who sang from his heart and loved with his soul; and Kalidasa, Sanskrit’s supreme poet. While playing the parts of these great men of the past, Bharat had an invaluable opportunity to probe deeper into their hearts and souls; study their character, mannerisms and the stuff they were made of. This in turn influenced his personality to a great extent.

Whenever the youth of today calls to mind Kabir, Kalidasa, Ghalib or Chaitanya, he im­mediately thinks of Bharat.

Once a film producer asked me for my photograph and I gave him one from my album. On seeing the photo he said: “You don’t look like a poet in it.” To this I had only one reply. “If you want a poet’s photo,” I said, “take one of Bharat.”

His knowledge is profound, but he sel­dom displays it. I remember a recent gather­ing at his residence when the topic of nuclear science came up for discussion. The discussion was obscure to all the persons pre­sent, but, curiously enough, Bharat was an interested listener. I thought he was merely trying not to appear an ignoramus. He proved me wrong by interposing a remark couched in such scientific terms that everyone looked at him in surprise. Later on, he shamefacedly confessed to me that included in his leisure- time reading were two or three scientific jour­nals to which he was a regular subscriber.

His collection of books is already a legend. His house is more like a library than a home. This brings to my mind an incident which hap­pened not long ago. I was waiting for Bharat in his living-room. At last he returned from his work. I asked him jokingly, “Whom do you want?” He paused a little and said: “You are entitled to ask this question because this house looks more as if it belongs to a writer than to a film star”

For years he has been in a position to ‘show off’ and throw his weight around. But he has always risen above the cheap tempta­tion to swank and brag. He is allergic to social functions and crowds, also to suits and boots. A simple shirt, a white trouser, a pair of chappals, have practically ruined his social career!

Since his wife’s death Bharat has been lonely and the impression one receives of meeting a sad, isolated man seems to have deepened. But no one will deny that the man has borne his loss with the characteristic stoi­cism of the philosopher. His devotion to his two daughters is tantamount to an obsession worthy of going down in folklore. The absence of a life partner is felt—sometimes acutely— but there is a strong disinclination to fill the void in a hurry.

No two children could wish for a more con­siderate father. To be capable of such extreme self-effacement, to be so careless of one’s own needs and happiness, one has to be more than an ordinary man. One has to be a Bharat Bhushan.

I wish I had a rupee to give myself for every song I have conceived and written in the solitude of Bharat Bhushan's house — the one haven of peace and calm for me ... - Sahir Ludhianvi

Whenever he finds time, he takes his child­ren to the nearby garden, to the sea-shore or the zoo, without even worrying that his nume­rous fans would mob him. Once he had taken his children to the zoo and was telling them, “This is an elephant and that one over there is a camel,” when he heard a chorus: “And this is Bharat Bhushan.” A crowd of youngsters had gathered around him and he was unaware of it till he heard his name.

At home he spends as much time with his daughters as he can, reading children’s stories to them or playing games with them.

And that is how I have come to regard Bharat Bhushan in almost every aspect. To me he is an extraordinary human being. Right from the way he receives his dinner guests down to his treatment of his domestics, the man displays patience, kindliness, genero­sity, considerateness and cool aplomb.

There is at least one excellent reason which accounts for the strong affinity between Bha­rat and me. We are both shy of public and so­cial functions. But while I am blunt and out­spoken in my antipathy to these functions, Bharat is tactful and diplomatic.

But there is another strange reason why I am so fond of Bharat Bhushan and seek him out so much and so frequently. Poetry, you see, hates Noise. It seeks, loves and epitomizes Sil­ence. And in no other man do I find silence cultivated to such a fine art. I find inspiration in his unremitting worship of Silence, in his uncompromising disdain of Noise.

Bharat is a genuine lover of poetry. His library is stocked with all the celebrated poets’ diwans and it is amazing how much he remem­bers of them. I was once trying to recite a poem of my own at his house and got stuck at a point. With the air of a man apologizing for the interruption, up came Bharat with the missing words. You might have thought he had read the poem yesterday! Or written it!

Most film producers who engage me to write their songs are generally eager and anxi­ous to give me all possible comforts and aids to good writing—a solitary, cool, well-furnish­ed room, good food and so forth. But I wish I had a rupee to give myself for every song I have conceived and written in the solitude of Bharat Bhushan’s house—the one haven of peace and calm I most love to retire to, for work or pleasure. And the greatest single fac­tor that contributes most largely to this peace and quiet, this blessed, ennobling, invigorating, activating silence is Bharat Bhushan himself!

(This article was written by Sahir Ludhianvi in 1961). 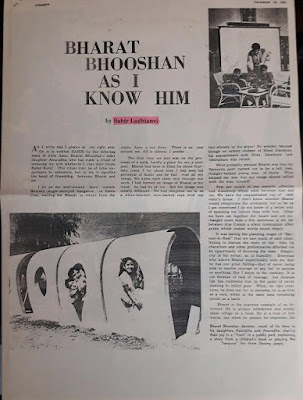 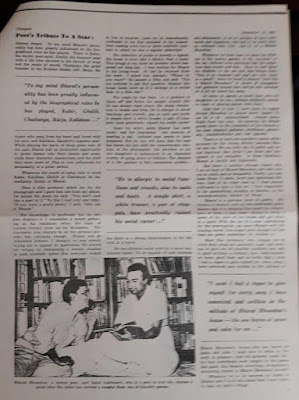 Posted by Sunil Bhatt at 5:08 pm No comments: